Since its introduction in 1989, the MX-5 Miata has become one of the most recognizable convertible sports cars. Although many competitors have come and gone in the past 30 years, only the MX-5 has endured. Through four generations, Mazda developed the MX-5 into a remarkably polished sports car.

Mazda's all-aluminum Skyactiv-G 2.0L inline-4 powers all Miatas, but is tuned for more power than the 155-hp it cranks out in the Mazda3. In the MX-5, the dual overhead-can 2.0L is rated at 181-hp @ 7,000 RPM and 151 lb.-ft. @ 4,000 RPM. Transmission choices consist of a 6-speed manual or an optional automatic. The manual gearbox is a close-ratio unit with a 1.000:1 sixth gear coupled to a 2.866:1 final drive ratio. Mazda optimized the 6-speed automatic for relaxed cruising; both fifth (0.713:1) and sixth (0582:1) are overdrive ratios. EPA fuel consumption estimates for the 6-speed manual are 26/34 MPG (city/hwy.). Opting for the automatic transmission raises the highway rating to 35 MPG. We averaged just under 32 MPG in mixed city and highway driving in our 6-speed manual test vehicle.

Mazda continued its tradition of designing a compact cockpit for the Miata. Anyone taller than 6 ft. will consider the interior confining and cramped, especially with the cloth top up. The instrument cluster consists of a central tachometer, flanked by a speedometer to the right and a multi-function display on the opposite side. Coolant temperature and fuel level are shown via digital bar graph gauges on the multi-function display. The leather-wrapped steering wheel has integrated controls for phone, audio, cruise, and the vehicle status. Mounted on the dash is the 7-in. infotainment touchscreen for navigation and audio functions. Climate controls knobs are mounted on the center stack within easy reach. Dual USB ports allow charging and audio input for mobile devices. A 12V power outlet is hidden under the dash in the passenger footwell. Infotainment system control knobs are on the center console next to the driver's seat. Mazda's engineers were unconcerned about cupholders: the driver's cupholder is between the seats, essentially unusable while driving. The passenger cupholder is cantilevered off the center console in the footwell.

Comfortable and supportive seats are especially important in a sports car. The MX-5 seats are only designed for passengers with slimmer builds; larger occupants will barely fit. The standard leather upholstered seats are moderately bolstered, but are only adjustable for reach and seatback rake. Height and lumbar support adjustment would be appreciated, as taller drivers may find their lower thighs positioned above the seat when driving. The trunk compartment is small, shallow, and best suited for soft luggage. A rolling carry-on suitcase will fit, but leaves room for little else.

The rigid chassis is the greatest contributor to the MX-5's much improved handling. Cowl shake, body shudder over bumps, and squeaks and rattles are impressively suppressed. As enthusiasts familiar with this roadster know, it's not about maximum g-force, but the quick turn-in response and nimble reflexes that set the MX-5 apart from any other competitor. Crank the steering wheel, and the MX-5 obediently follows the intended arc. Understeer in almost nonexistent, but mild power-on oversteer is a distinct possibility in 1st or 2nd gear. Steering feel is superb; the driver seems almost directly connected to the road. Although the short 90.9-in. wheelbase and firm suspension tuning contribute to razor-sharp handling, a jittery ride on patched concrete surfaces is an unavoidable consequence.

Mazda's Skyactiv-G 2.0L is surprisingly buzzy engine, considering its small displacement. At cold idle, vibrations envelope the entire body structure, but subside as the engine warms up. A convertible's less rigid body structure undoubtedly amplifies engine vibrations. Throttle response is linear up to the 7,500 RPM redline. Throttle response below 2,000 RPM is minimal, so keeping revs near the 4,000 RPM torque peak is essential. However, the Miata's low curb weight contributes to sprightly acceleration; redlining the engine was rarely necessary even in spirited driving.

A short-throw lever, topped by a leather-wrapped aluminum knob connects to the standard 6-speed manual. This close-ratio gearbox has the perfect ratios for winding two-lane roads; shift gates are closely spaced, but there is just enough "notchiness" to select the correct gear. A moderately heavy, progressive clutch assists with smooth shifts. The 2.0L inline-4 revs over 4,000 RPM above 70 MPH, due to the non-overdrive sixth gear. For relaxed highway cruising, the automatic and its taller (numerically lower) overdrive ratios is our recommendation.

Top-down motoring in the MX-5 is acceptable up to about 50 mph; the folding mesh wind blocker between the seats effectively cuts turbulence. If the ventilation system is set correctly, cruising with the top retracted in 50-60 deg. F temperatures is surprisingly enjoyable. When the weather becomes chilly, the manual convertible top can be erected and latched in less than 10 seconds while seated. At 70+ MPH, wind, tire and engine noise would cause fatigue on long trips, even with the top raised. As a long-distance cruiser, the cloth-top Miata is out of its element, but for road trip duty the Miata RF is the right choice.

Mazda has never wavered in its mission to continually improve its pure sports car. The Miata is unquestionably a niche 2-seater, likely to be a second or third vehicle in an owner's collection. Part of the MX-5's appeal is that there is no other sports car that matches is unique combination of affordability and driving enjoyment, and that's why the Miata has no competition. 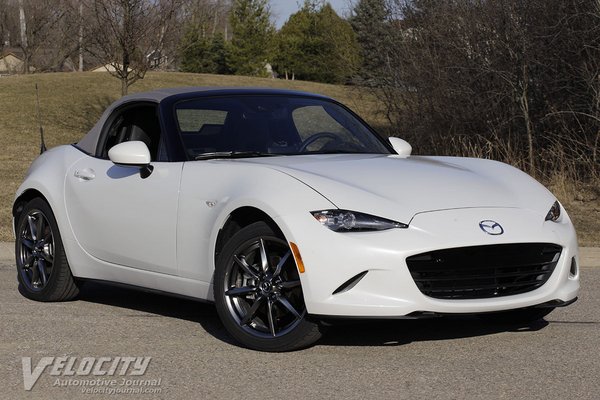 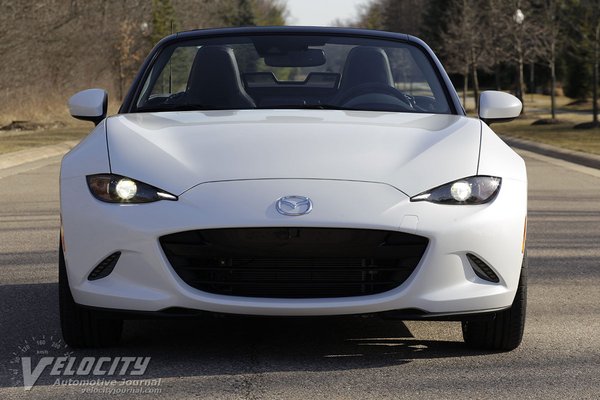 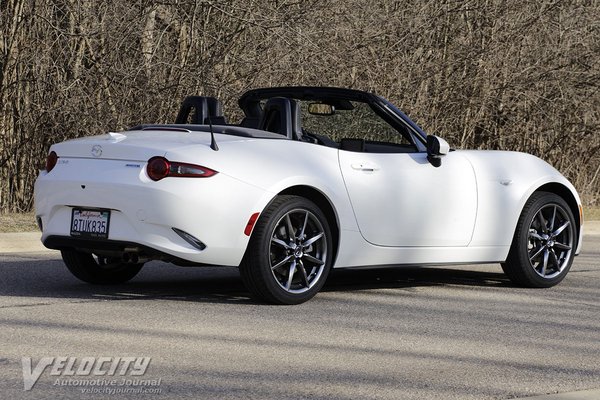 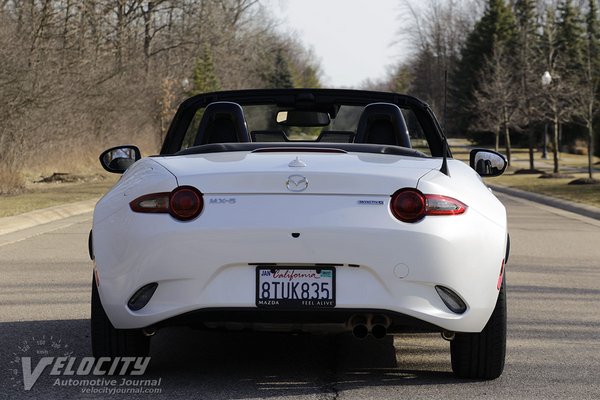 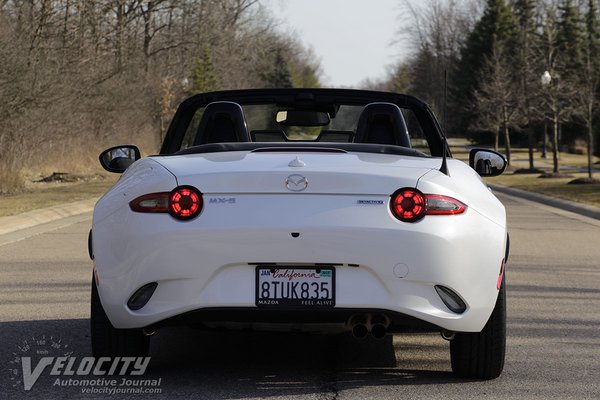 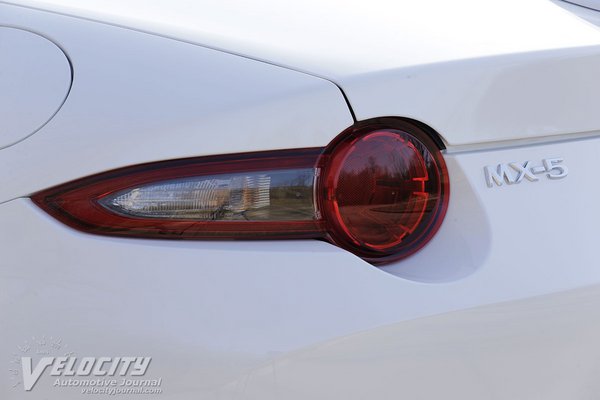 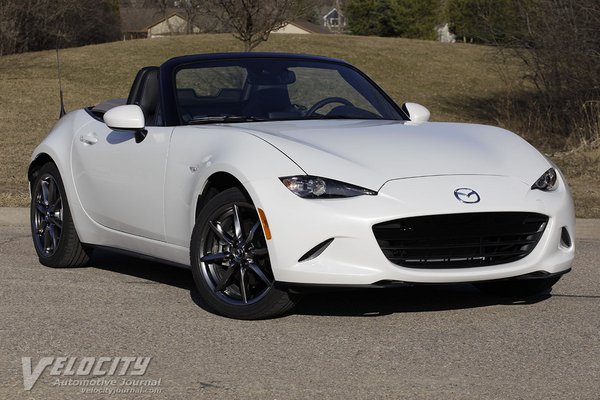 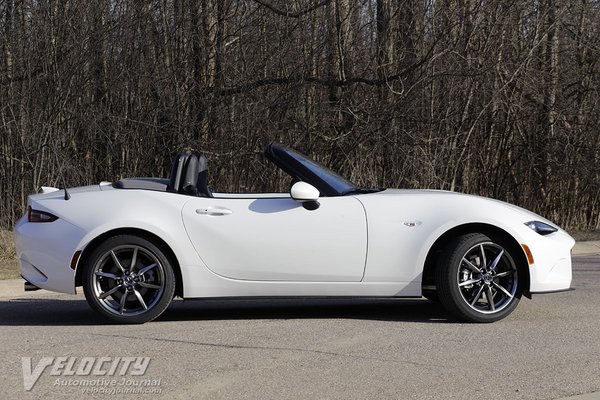 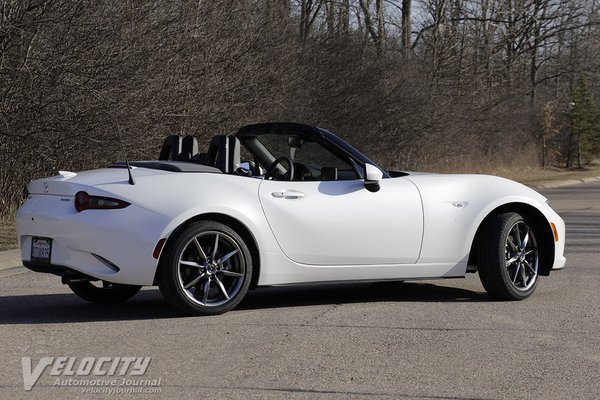 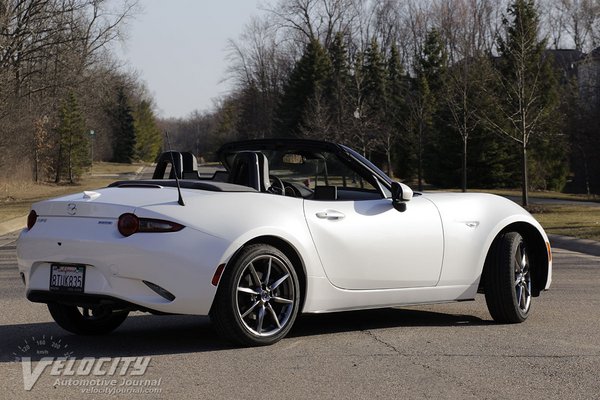 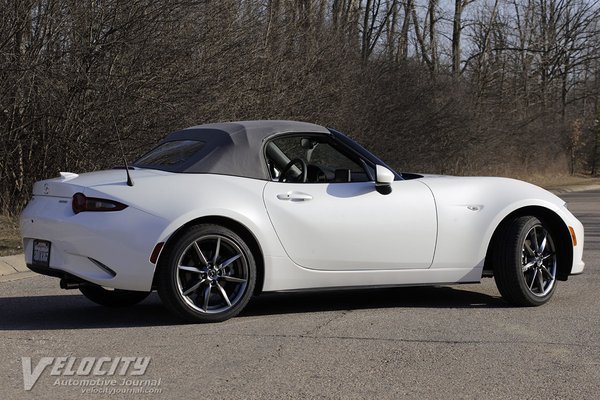 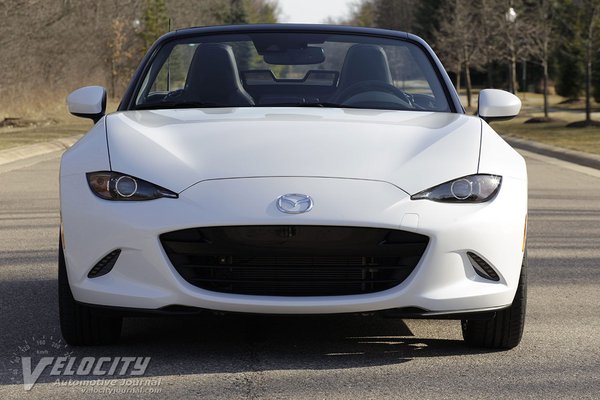 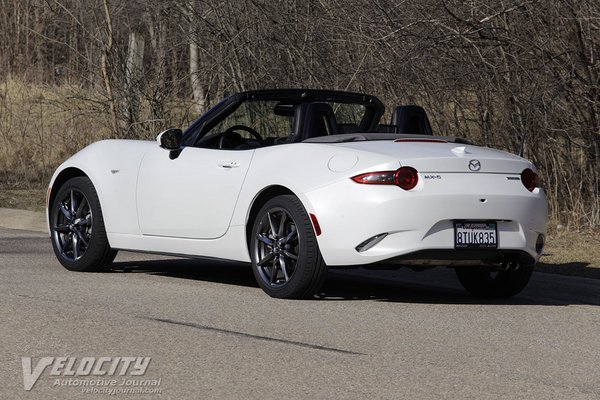 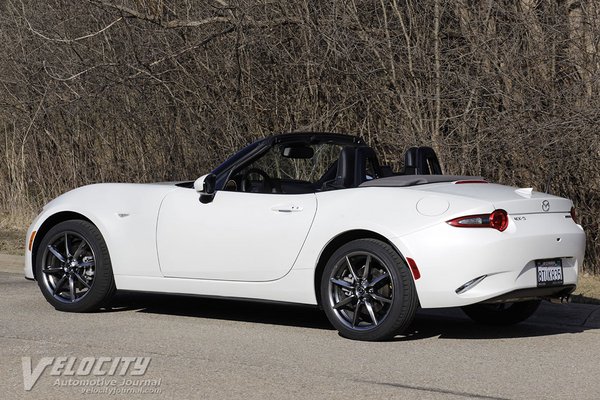 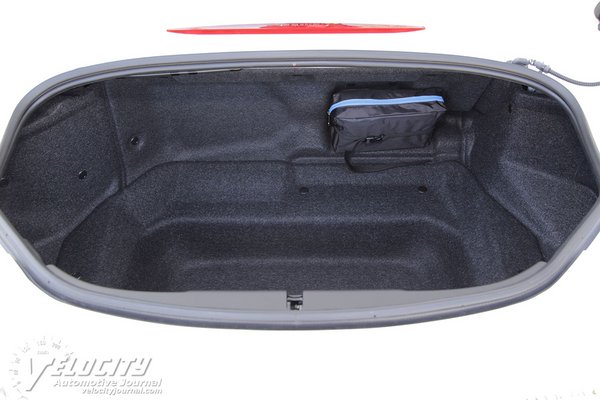 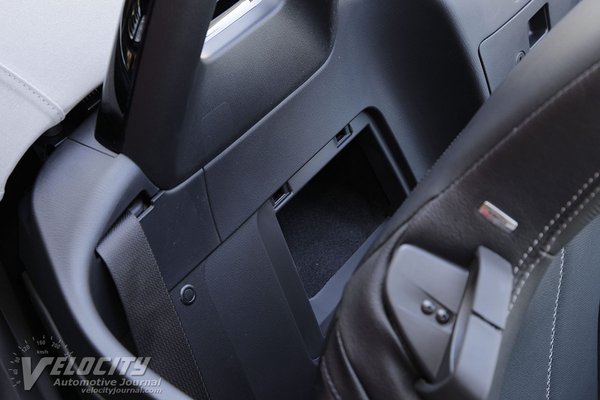 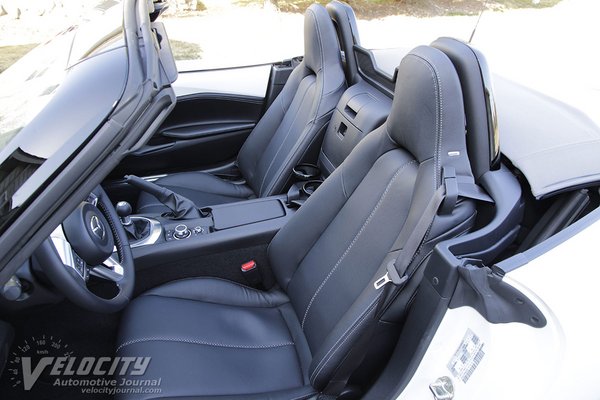 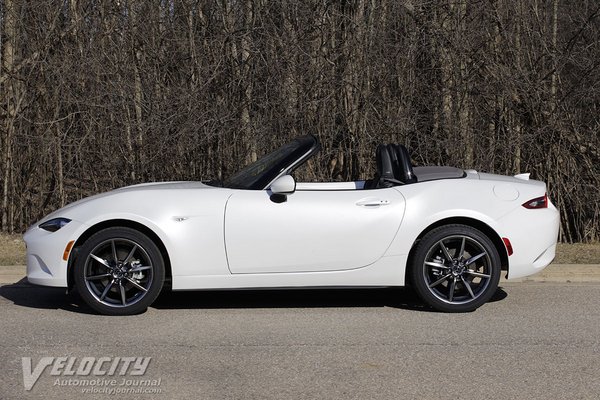 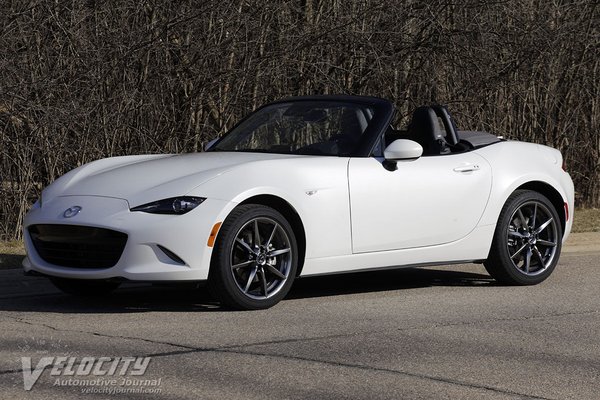 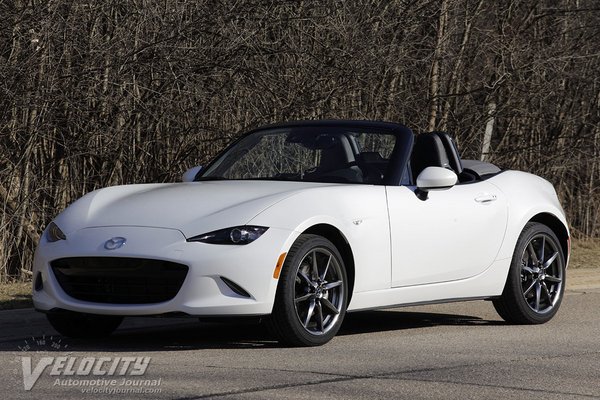 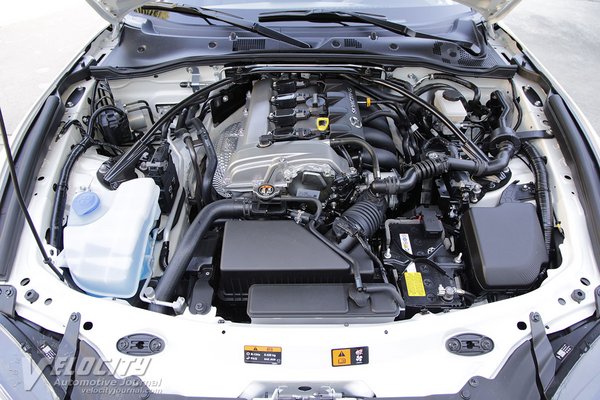 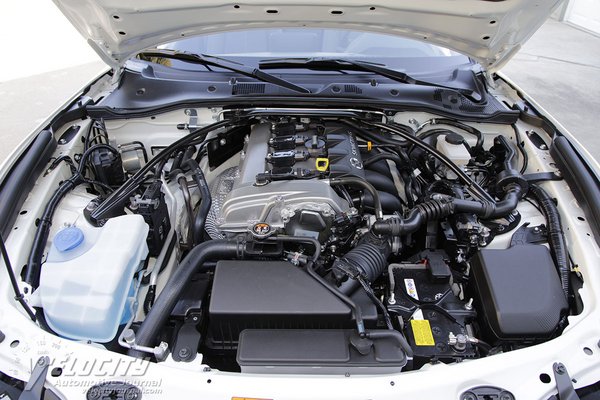 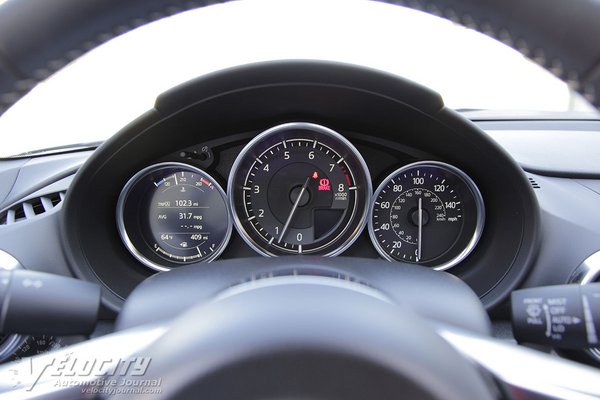 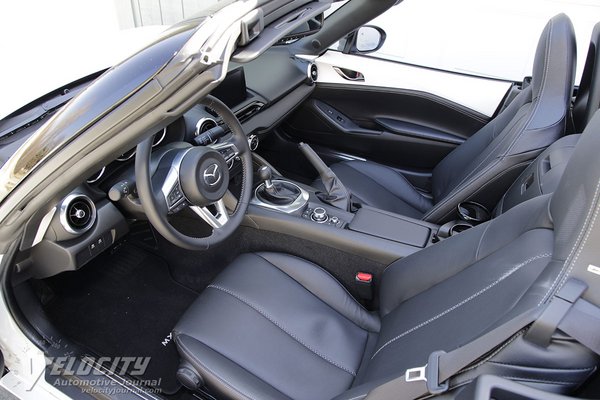 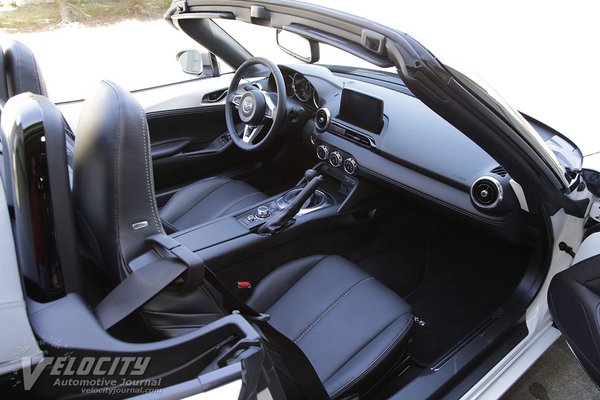 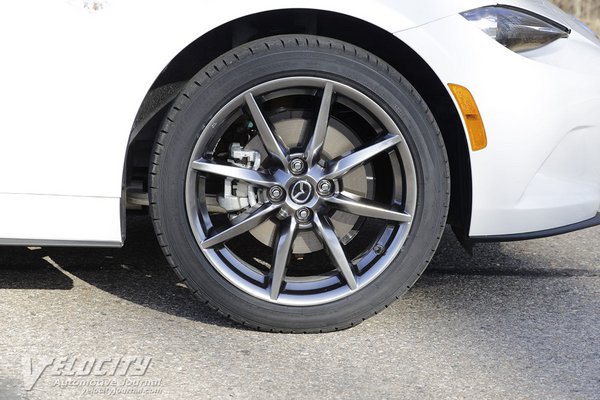