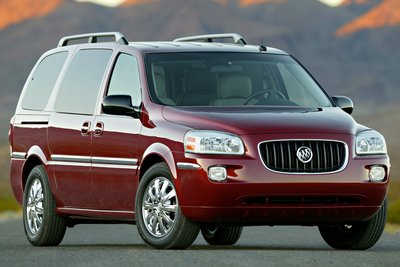 Buick adds a third utility vehicle to its lineup with the new Terraza. GM is hoping to draw family oriented buyers with its crossover sport van which combines SUV styling with a minivan. While the appearance is reminiscent of an suv, it maintains the cargo flexibility, low step in, safety, and fuel economy associated with minivans. The Terraza has a 200 hp 3500 V6, a 4-speed automatic, 4-wheel disc brakes. Versatrak AWD and stability control are optional.

New Terraza adds a third utility vehicle to Buick's lineup. Terrazza is a mid-sized van with SUV styling traits to broaden it's appeal. A 200 hp 3500 V6 provides power. Both FWD and AWD models are offered.