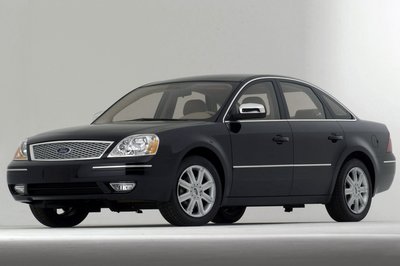 The Five Hundred is the spiritual succesor to the original Taurus. A unique combination of attributes sets this somewhat generically styled sedan apart. The Five Hundred features a large trunk with fold-down rear seating and upright, higher seating positions intended to appeal to SUV owners. Mechanically the Five Hundred is available with a 3.0L V6 and a continuously variable transmission with optional AWD. With pricing in the mid to upper twenties, the Five Hundred has a lot more to offer than the aged Taurus. Available features include: ABS, traction control, and Advancetrac (TM) stability control.

New large-midsize sedan model for Ford that effectively replaces the Taurus. Five Hundred is based on a platform derived from Volvo. Both FWD and AWD versions are offered. A continuously variable transmission is standard, with a 6-speed automatic an option. The Five Hundred is produced in Chicago alongside the Freestyle, the Mercury Montego and an upcoming Mercury version of the Freestyle.