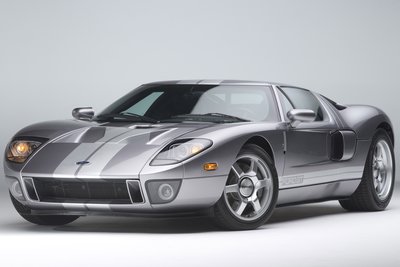 The Ford GT is the production version of the 2002 concept. The GT serves as Ford's halo car recalling their glory days when they beat Ferrari at Le Mans. Naysayers could say that the GT served as a distraction while Ford retooled its product line, but the GT is a bona-fide performance car. The GT features an aluminum space frame, an all aluminum double wishbone suspension in front and rear, and Brembo brakes. The wheels are 18" in front and 19" in back. Power is supplied by a 500hp version of Ford's 5.4L modular V8. It has a rear mounted 6-speed manual transaxle. Priced at $140,000 it is a bargain of sorts as prices of supercars easily top $200,000. Ford will produce about 1500 GTs a year, but production is expected to end after the 2006 model year.