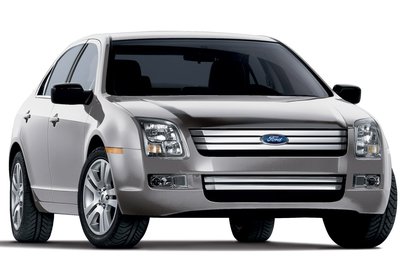 The Ford Fusion is a mid-sized sedan that fits between the Focus compact sedan and the Five Hundred large sedan. The Fusion is distinguished by distinctive exterior styling which is a little less generic than new mid-sized offerings. Mechanically, the Fusion is based on a version of the competant Mazda6 platform. Offered in three trim levels, Fusion is powered by either a 160hp inline-four or 210hp V6. Four-cylinder models can be equipped with either a 5-speed manual or automatic transmission. The V6 model features a six-speed automatic as standard equipment. An all-wheel-drive model will join the lineup in the 2007 model year and a Hybrid powertrain has been promised. The interior features a number of appearances based on color and trim level, but can be configured with an all-black leather interior similar to the 2003 Ford 427 concept car from which the Fusion was inspired.

The all-new Ford Fusion is added to bridge the gap between the Focus compact sedan and the Five Hundred large sedan effectively replacing the departing Taurus. The 5-passenger, mid-sized sedan is based on Ford's CD3 architecture derived from the Mazda6. Styling is drawn from the Ford 427 concept car shown in 2003. Fusion is offered initially with either a 160hp inline-four or 210hp V6 in FWD only. All-wheel drive and Hybrid powertrains are promised for future model years.