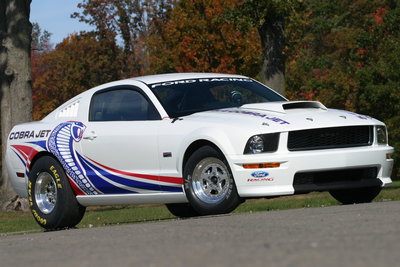 In 1968, Ford took the NHRA Winternationals by storm with the Cobra Jet Mustang. Only 50 factory lightweights were built, and in its first appearance, the Cobra Jet won. Forty years after this historic event, Ford Racing is happy to announce that the legend continues with a new NHRA-legal race car - the 2008 Cobra Jet Mustang! The 2008 Ford Racing Cobra Jet (FR500CJ) is a factory-built race car (serialized but no VIN), ready for the...Read.