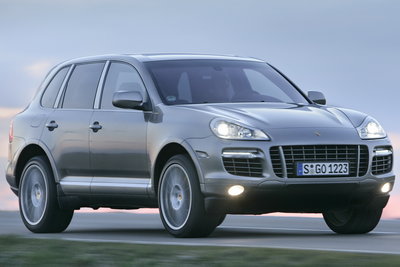 The Cayenne is a vehicle that many Porsche purists feel shouldn't exist. While the thought of a Porsche-badged SUV may have turned stomachs, it has been turning heads and turning in sales and profits for Porsche. The Cayenne range starts at just over $40,000 for a V6 model. Performance builds with sharp increases in price to the range-topping Turbo S model. The twin-turbocharged Turbo S makes 550hp, but bumps the sticker price well over $100k. This earns the Cayenne the dubious distinction of having one of the highest price spreads in the market. No matter which model you choose, the Cayenne is a solid SUV, capable of on and off-road performance.

The Turbo S rejoins the lineup. The twin-turbo V8 in the Turbo S is rated at 550-bhp, an increase of 50 horsepower over the Turbo model. The Turbo S wears 21-inch wheels shod with 295/35R21 tires.