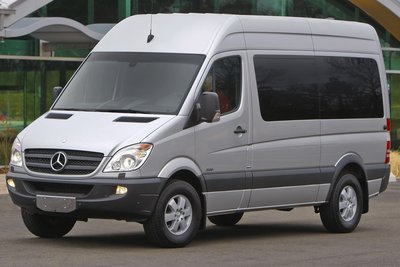 The Sprinter van is a large van made by Mercedes-Benz and assembled in the United States. Prior to the 2010 model year, the Sprinter was sold under the Dodge and Freightliner brands. After Chrysler's bankruptcy, Mercedes-Benz chose to continue selling the Sprinter in the US as a Mercedes. The Sprinter lineup includes several body styles including a passenger van, cargo van, and a chassis cab for upfitting. The Sprinters enormous size accommodates up to 12 passengers. The standard 3.0l turbodiesel engine provides higher fuel economy than smaller vans from Ford and GM.

For five years, the Mercedes built Sprinter was assembled in the US and sold under the Dodge and Freightliner brand names. With the dissolution of business relationships between Chrysler and its former parent Daimler, select Mercedes-Benz dealers will begin to sell the Sprinter starting in 2010.