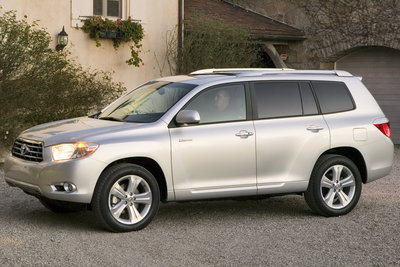 The Toyota Highlander was one of the first SUVs to fit the definition of a car-based crossover SUV. Introduced in 2008, the second generation grew significantly in size which unsurprisingly made it about the same size as a Honda Pilot. The Highlander offers optional 3 row seating with a unique middle row seating concept featuring a small bridging seat that stows in the front center console. The base model is powered by a fuel efficient four-cylinder engine. All other models except the hybrid version feature a 270hp 3.5L V6, five-speed automatic and either front- or all-wheel drive. Highlander hybrid models feature a 3.3L V6, CVT and AWD.