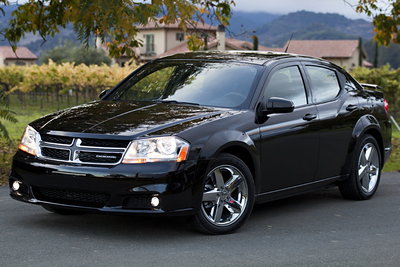 Dodge's entry in the hotly contested mid-size sedan segment is the Avenger. The Avenger name was once used on a sporty coupe, but is now used for a mainstream sedan. Like its sibling the Chrysler Sebring (now the 200), the Avenger was thoroughly updated in 2011 to create a more competitive vehicle. It is offered in a number trim levels ranging from a very basic Express model to the sportier Heat. On paper, the new Avenger looks vastly improved. In segment where Toyota sells 10 times as many Camrys, the future for the Avenger is looking brighter.

Dodge thoroughly revised the Avenger for the 2011 model year. The Avenger wears new front-end and rear-end styling. On the inside, the Avenger has an all-new interior. The 2.4l four cylinder is now paired with a six-speed automatic and a more powerful 3.6l V6 is under the hood of higher trim levels. Engineers reworked the suspension lowering the ride and increasing the track. Chrysler addressed NVH issues with additional sound deadening material.