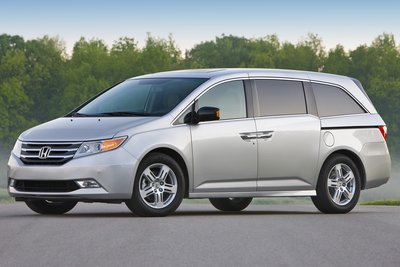 The Odyssey has long been the benchmark for all other minivans. Not only does it offer decent performance, more car-like driving, and fold-flat rear seats, it also brought the Honda credibility and residual values to the minivan segment. Although models by Toyota, Nissan and Chrysler have applied pressure, Odyssey is still the one to beat. Four basic trim levels are offered: LX, EX, Touring, and Touring Elite. A V6 engine with variable cylinder deactivation for improved fuel efficiency powers all models. A long list of features such as power-operated windows in the side doors, a floor-storage system, an easy to use 3rd-row seat system, DVD entertainment system, updated satellite navigation system and an available moonroof help the Odyssey maintain its status.

The Odyssey is all new for 2011. Distinctive new styling wraps a body that is significantly shorter in height, yet wider than its predecessor. Even though the body has changed proportions, the new Odyssey boasts increased interior volume, headroom and legroom. Engine output increases slightly to 248-bhp and a six-speed automatic is now offered on the high-end model. The Odyssey boasts a number of new features including an optional split-screen entertainment system, an in-dash drink cooler, and a highly configurable second row of seating.