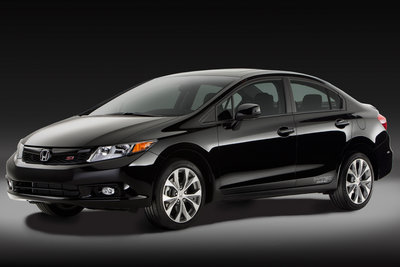 Through nine generations, the Honda Civic has won many fans. It should come as no surprise that Honda offers more varieties of the Civic than it does of any other product. Available as both a coupe and sedan, the Civic offers no fewer than three different powertrains including a hybrid and a model that runs on compressed natural gas. The entry level DX model sports a low base price but also omits air conditioning and common conveniences like cruise control and power locks. For about $2000 more, the LX model includes these items as standard equipment. The Civic EX offers the best equipment for the money. It includes alloy wheels, four-wheel disc brakes, and a sunroof. The Civic is also offered with an optional navigation system and leather seating (EX-L). Most performance enthusiasts should be familiar with the Civic Si models. The Si pairs a six-speed manual with a larger 2.4l engine rated at 201-bhp. The Si offers an uncommon level of performance for around $23,000. Although most models are rated at a respectable 28 / 39 (city/highway), the new Civic HF is rated at 29 /41. For even better mileage, the latest Civic Hybrid uses a lighter lithium ion battery and allows electric only driving to boost its fuel economy to an impressive 44 city / 44 hwy. Although the Civic is priced a little higher than some of its newer competitors, the Civic enjoys Honda's long history of reliability and high resale values.

The ninth generation Civic is all new, although the overall styling is an evolution of the eighth generation. The lineup has now grown to include 8 major trim levels including the return of a higher mileage HF sedan model. Although the exterior of the new model is almost identical in size to the old model, the new Civic has increased both its passenger and cargo capacity despite a 1 inch reduction in wheelbase. The most common engine, the 1.8l four-cylinder is still rated at 140-bhp, but fuel economy has improved to 28 city / 39 hwy in models equipped with the five speed automatic. The Si performance model has switched to a new 2.4l four-cylinder engine which produces slightly more horsepower, but significantly more torque. The Hybrid has a new 1.5l four-cylinder engine and lithium ion battery pack. The Hybrid is rated at 44 city / 44 highway.