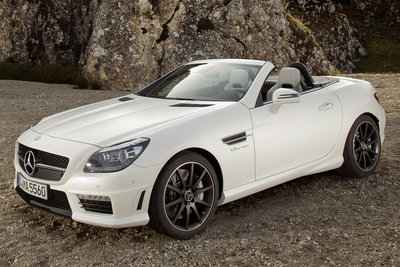 The smallest Mercedes convertible is the SLK roadster. With compact dimensions and seating for two the SLK-Class competes with the BMW Z4 and the smaller Porsche Boxster. Now in its third generation, the SLK has a power-retractable hardtop for year round motoring and security. A variety of models are offered with alphanumeric designation tied to the powertrain. The base model is the SLK250 which is powered by a fuel-efficient four-cylinder turbo. The mid-range SLK350 has a 302-bhp, 3.5l V6 under the hood. The AMG factory performance SLK55 AMG model equips a 415-bhp V8 engine which is a lot of power for a 3500 lb. car. The SLK offers a unique panoramic roof that can be darkened at the touch of a button.

The SLK roadster enters its third generation for 2012. The new model is roughly the same size increasing by only about an inch in length and width. A vertical front grille and more pronounced hood define the new styling. The SLK retains its hard top convertible, although a new feature adds a glass roof with the ability to block the light. Mercedes offers the US model with either a 1.8l four-cylinder engine (SLK250) or a 3.5l V6 (SLK350). A six-speed manual is standard on the SLK250, with a seven-speed automatic optional. The seven-speed automatic is standard on the SLK350.