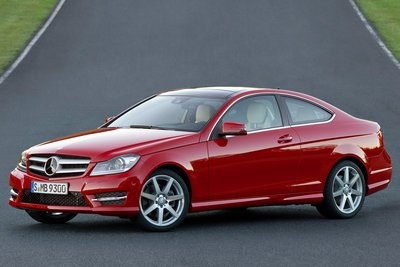 The Mercedes-Benz C-Class lineup has grown to include a handsome two-door. Unsurprisingly, the C-Class coupe is almost identical in size to its German rivals, the BMW 3-Series and Audi A5. The C250 coupe equips a turbocharged four-cylinder engine rated at 201-bhp. The C350 coupe includes a more powerful V6. The most powerful model is the C63 AMG with a large V8 under the hood. All models are rear-wheel-drive and include seven-speed transmissions. The standard equipment list includes a panoramic sunroof and power equipment, but like other Mercedes models, heated leather are an upgrade.

The C-Class adds a two-door model for the first time since Mercedes dropped the hatchback from the US lineup in 2006. The C-Class coupe is almost identical in size to its German rivals, the BMW 3-Series and Audi A5. Three engines are offered: a 1.8l turbocharged four-cylinder, a 3.5l V6, and a 6.2l V8. A seven-speed automatic is standard on C250 and C350 models, whereas the C63 AMG is equipped with a 7-speed sequential manual.