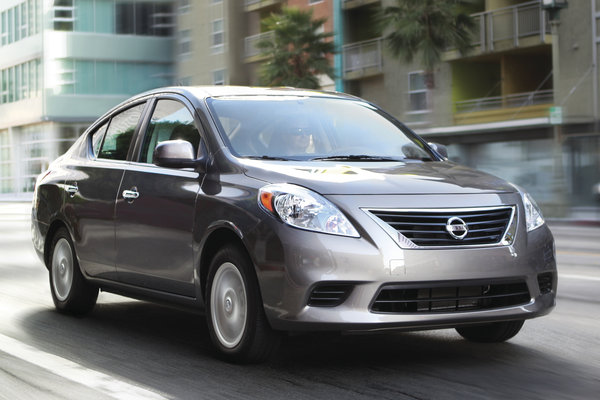 The Versa is Nissan's smallest car and least expensive model. All-new in 2012, the second generation model uses advanced powertrain technologies to turn in a respectable EPA rating of 30/38 (city / highway). Roughly the same size as the Hyundai Accent, the Versa has more legroom and cargo volume than other vehicles in its class. Touting a low starting price of under $12,000 the base model forgoes some common equipment, but a Versa with a reasonable amount of equipment can still be had for around $16,000.

Nissan thoroughly reworked the Versa for the 2012 model year. The Versa wears new styling outside and in. Built on a new platform, the new Versa is slightly shorter in length and height. Passenger volume has decreased slightly, but the sedan has an additional cubic foot of room in the trunk. The updated 1.6-liter four-cylinder engine uses two injectors per cylinder to reduce the amount of fuel used. Combined with the new CVT transmission, the Versa is expected to be more fuel efficient. Nissan estimates an EPA rating of 30 MPG City, and 38 MPG highway.