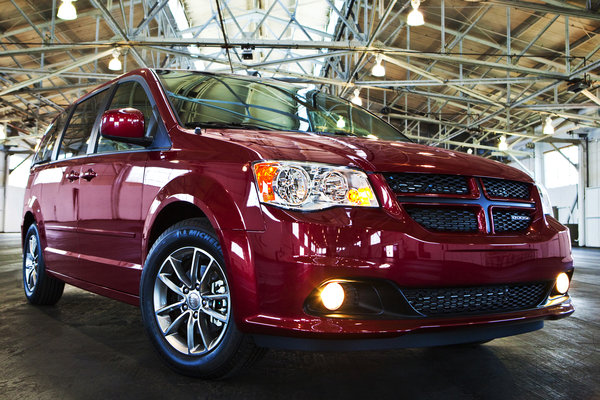 Chrysler has methodically improved their minivans to ensure that they remain competitive with popular alternatives from Honda and Toyota. All Grand Caravan models now equip a 3.6l V-6 engine and six-speed automatic transmission, which has greatly simplified the model lineup. The Grand Caravan lineup starts with the AVP (American Value Package) budget model, ranging up to the top R/T trim level. Chrysler minivans include a feature called Stow 'n Go seating which allows the second row bucket seats to fold forward in to large storage wells in the floor. While the storage bins are handy, the seats are undersized and lack the flexibility of 2 and 3 passenger second row seating options from Toyota and Honda. The third row seat folds flat in the rear storage well, but also features an intermediate rear-facing tailgating position. The EPA estimates fuel economy at 17 / 25 (city / highway) which is a bit low for the segment. Unlike the Chrysler Town & Country, the Grand Caravan has less standard equipment and requires upgrades and options to reach a similar level of equipment. This makes the Town & Country a much better value.

A 30th Anniversary Edition package is available on the SE and SXT trim levels.