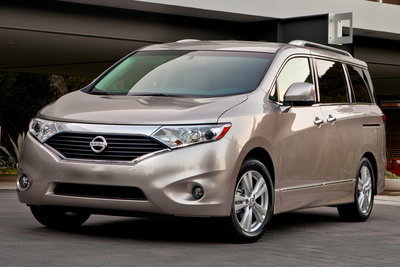 Now in its fourth generation, the Quest is a tall minivan with angular styling. Although the Quest is nearly identical to the class-leading Odyssey in wheelbase and track, the taller Quest should have more room inside. A 3.5l V6 engine powers all models. Rated at 253-bhp, the Quest is competitive with other minivans. Like other Nissan models, the Quest is equipped with a CVT rather than a conventional automatic. One area that sets the Quest apart from the competition is the design of their seating. Most minivans have a third row seat the folds flat in to the floor, creating a large storage well when the seats are in use. Chrysler vans also offer this feature on the second row. The Quest is more like a SUV. The second and third row seats fold forward creating a flat load floor on their solid backs. This allows the Quest to preserve its covered storage well even when the third row is stowed. The Quest offers all the modern minivan conveniences like power sliding rear doors, conversation mirrors and optional entertainment systems. One novel feature is the optional climate filtration system that can purify the air with the touch of a button.