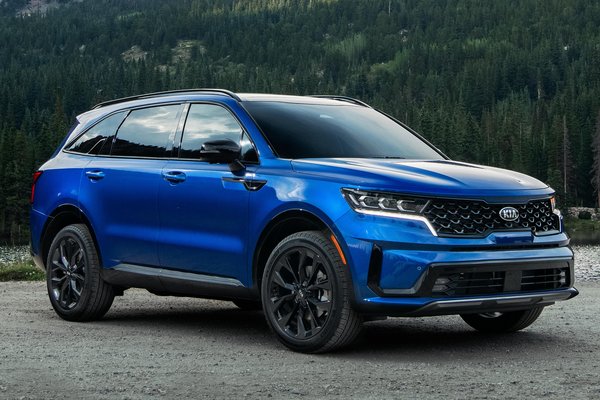 The fourth generation Sorento arrived for the 2021 model year. The new model is nearly identical in size to its predecessor outside and in. The base engine is a 191-hp, 2.5l four-cylinder. Top trim levels equip a turbocharged 2.5l for 281-hp. A hybrid powertrain is offered for the first time. The Sorento hybrid pairs a 1.6l turbocharged four-cylinder with an electric motor for increased fuel-efficiency. On the inside the Sorento retains its three-row seating and long list of standard features.

The all-new fourth-generation Kia Sorento changes the game. Again. Since its debut in 2002, the Sorento is one of Kia's best-known and best-selling vehicles, becoming progressively more powerful, more attractive, better engineered and more technologically advanced in each new iteration. The 2021 model sets a new standard for Sorento's sustained excellence and leadership in the compact SUV segment as the only vehicle in its class to offer the best estimated fuel economy for a 3-row SUV...Read.